ISLAMABAD: President Arif Alvi on Wednesday urged the United Nations (UN) to fulfill its promises about the resolution of the long-standing Kashmir dispute.

While addressing a rally in Islamabad in connection with Youm-e-Istehsal here on Wednesday, the president urged the international community to push India to allow the media to enter Indian Illegally Occupied Jammu and Kashmir (IIOJ&K) to report facts from there. 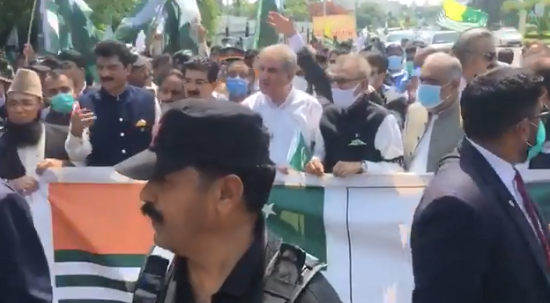 Entire Pakistani nation is united on the Kashmir issue and it will continue its efforts for Kashmir cause, he reaffirmed.

President Alvi said Kashmiris should not consider themselves alone as Pakistan will continue its peaceful efforts for realization of their right to right to self-determination.

It is pertinent to mention here that Pakistan is observing Youm-e-Istehsal today (Wednesday) to express solidarity with the oppressed Kashmiri people on completion of the one-year military siege of Indian Illegally Occupied Jammu and Kashmir (IIOJ&K).

One minute silence was observed across the country at 10:00 am.

Rallies are being taken out across the country to denounce Indian unilateral illegal actions against Kashmiri people.

On the 5th August 2019, the special constitutional status of Indian Illegally Occupied Jammu and Kashmir was scrapped by the Modi government.

Bill on paternity leaves for fathers approved by NA body