Peshawar: The existing Pro-Vice Chancellor of Islamia College University, Peshawar Dr. Naushad Khan who has also been serving as Dean Faculty of Social Science, Arts & Languages since 2017, had been issued letter of displeasure by the selection board for nepotism in scrutinizing candidates for the position of professor, Islamic Theology BPS-21. According to official documents of the institute, over and above the required criteria Mr. Hussain Farouq was selected while well qualified candidates with sufficient research publications have been rejected. The letter of displeasure indicated that the Board found discrepancies with regard to experience, publications and selection criteria on which the selection committee has been declared biased and unfair.  Despite of high pressure from the current Pro-Vice Chancellor, the displeasure letter has neither been withdrawn in syndicate and nor by the board yet, official confirmed. Although the above teacher has been illegally appointed as Associate Professor but the court not only unearthed the wrong doings of the scrutiny committee but directed the authorities to place this case of illegal appointment in the ensuing meeting of the syndicate so that justice be provided to the suffering one who has challenged this illegal appointment in Peshawar High Court. Now the acting VC is using delaying tactics and reluctant to convene the meeting of the syndicate, official added.

The Governor of Khyber Pakhtunkhwa Shah Farman instead of conducting inquiry   against Dr. Naushad for his track record and promoted him to higher position as Pro-Vice Chancellor of the University. It was investigated that he is a grade 21 officer while eligible senior teachers/officers of BPS-22 have been neglected for the position, undermining the University Act that says “12A.(1) There shall be a Pro-Vice-Chancellor of a University to be appointed by the Chancellor from amongst the three senior most Deans or Teachers, for a period of two years to act as officiating Vice -Chancellor or Acting Vice-Chancellor, as the case may be, in accordance with this section.” It is told that the publications of selected Pro-Vice Chancellor are not recognized by Higher Education Commission of Pakistan but due to mutual interest between Governor and Dr. Naushad Khan, he has been placed, the source informed. 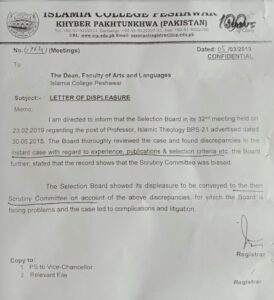 According to the Khyber Pakhtunkhwa Universities Act-2016 provided that “The process of selection of a new Vice-Chancellor shall be initiated six months prior to the expiration of the existing term of the incumbent.” however Dr. Naushad Khan is about to complete one year as Acting Vice Chancellor and no regular Vice chancellor is being appointed.

Hence! A female student of Pakistan Studies, Haseena Jahangir has blamed and submitted her case to Anti-Corruption Department, stating that during the convocation-2017 she had been awarded Gold Medal by the ex-Governor Iqbal Zafar Jaghra in the presence of Pro-Vice Chancellor Dr. Naushad, while according to her when she submitted her thesis the current acting VC Dr. Naushad demanded to donate one lac to him and to have a lunch with him outside in a private hotel. On denying the trip outside with Pro-Vice Chancellor, her thesis on Pakistan Studies were handed over to a retired professor of Islamic Studies rather than a subject expert and the irrelevant teacher reduced her marks to deprive her from the Gold Medal and the merit was tempered with handwriting, She told.

An official source informed that Fakhre Alam Noshad the son of Acting Vice Chancellor Dr Noshad Khan, a student of MA Pakistan studies, session 2015-2017, is a serious patient of kidneys and is on dialysis till date. Dr Noshad khan has been the Chairperson of Pakistan Studies department till date. For his medical bills of his ailing son huge amount had been reimbursed to him. In this duration of studies, his ailing son had been hospitalized in Karachi for about 28 days for regular dialysis. His son on bed has been getting more than maximum marks in all his papers/quizzes/assignments and maximum 4.0 GPA in every semester. Finally his absent ailing son was awarded a gold medal and is inducted as visiting Lecturer in his own controlled department who is still on bed and is unable to deliver lectures to students, the source told.

It was found that in the recent past the Institute under the order of Dr. Naushad Khan intended to terminate 196 contractual and daily wagers staff including more than 100 class fours, in order to overcome the financial crunch faced by the university, while few selected daily wagers were issued with contracts. On the contrary in the ongoing month the governor is requested through a letter seeking approval for hiring more new staff on daily wages.

The office of Pro-Vice Chancellor Dr. Naushad was visited to have his stance to these allegations but he didn’t deem necessary to include his version accordingly and added that the Governor Shah Farman and Chief Secretary been his students, while his spokesman told that he is thoroughly blank about any decision being taken by the Vice Chancellor office. Similarly the Press Secretary to Governor has also been contacted for reciprocation, who confirmed that the message was communicated to Governor for any reply to the story, but the Governor didn’t responded yet, the Press Secretary informed.

Pfizer to get $1.95 billion to produce millions of doses of COVID-19 vaccine

Demi Lovato gets engaged to Max Ehrich: ‘I’m honored to accept your hand in marriage’

Youth can play important role in the economic development of the province: Abdul…