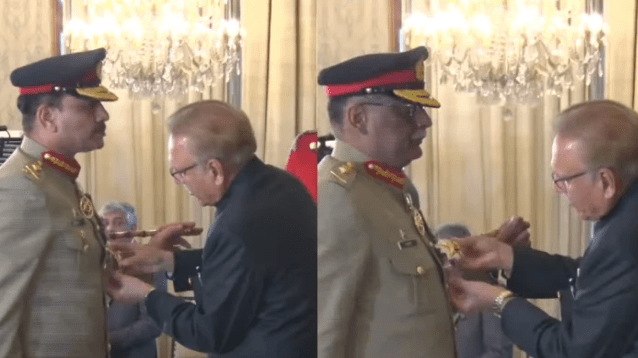 General Syed Asim Munir, the Chief of Army Staff (COAS), and Sahir Shamshad Mirza, the Chairman of the Joint Chiefs of Staff Committee (CJCSC), both received the Nishan-e-Imtiaz (Military) on Thursday from President Dr. Arif Alvi.
In a unique investiture ceremony held at the Aiwan-e-Sadar, the awards were given to the new COAS and CJCSC.
Federal ministers, the Prime Minister Shehbaz Sharif, Senate Chairman Sadiq Sanjrani, Speaker of the National Assembly Raja Pervaiz Ashraf, and others were present at the occasion.
Gen Munir took over as COAS last month after Gen Qamar Javed Bajwa retired and Gen Sahir Shamshad Mirza took over for Gen (retd) Nadeem Raza.
After Prime Minister Shehbaz elevated them to the rank of general and appointed them to the new positions, the generals assumed control of their new responsibilities.

Who is Gen Asim Munir?

In 1986, General Munir was appointed to the 23rd Frontier Force Regiment. He received the coveted sword of honour after graduating from the 17th Officers Training course in Mangla.
He served as the General Headquarters’ Quartermaster General prior to taking control (GHQ).
Gen. Munir was appointed as the Inter-Services Intelligence (ISI) director general in 2018 and afterwards moved to Gujranwala as the corps commander.
The general also holds a M Phil from National Defence University in strategic security management and public policy.
As the first army commander to lead both MI and ISI, Gen. Munir made history. Additionally, he received the Sword of Honor first among army chiefs.

Who is Gen Sahir  Shamshad Mirza?

Gen. Mirza, who is a native of the Sindh Regiment, has a distinguished military career to his credit, especially over the last seven years in key leadership roles.
During the latter two years of Gen (retd) Raheel Sharif’s administration, Gen Mirza gained notoriety as the director of general military operations. He was a member of Gen (retd) Sharif’s core group at the General Headquarters when he oversaw the military campaign against the TTP and other militants in North Waziristan.
Furthermore, Gen. Mirza played a key role in the Quadrilateral Coordination Group, a body that brought together representatives from Pakistan, China, Afghanistan, and the United States to mediate intra-Afghan discussions. Moreover, he was a part of the Gilgit-Baltistan reform committee under the direction of Sartaj Aziz.